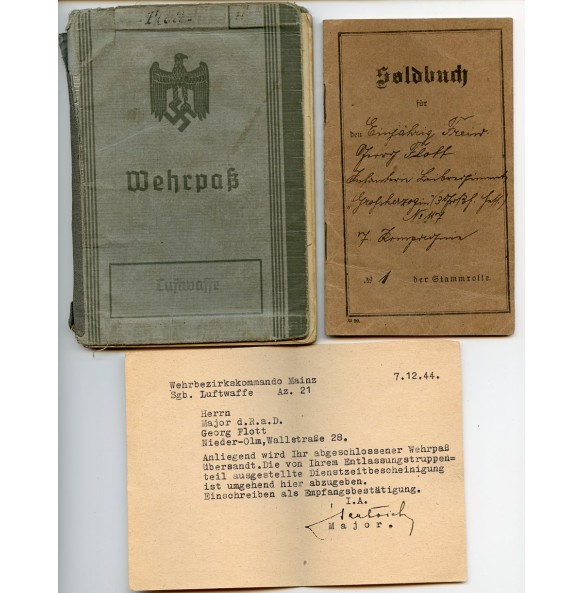 Flott entered the army in 1911 in Mainz for a professional soldier career and saw a lot of action in WW1. Two pages of regiments were listed and Flott took part in famous battles in France and Flanders  such as Neufchateau, Verdun, Armentieres, Artois, Chambrai,... He was awarded with several decorations for his actions such as the EK2, Verdienstmedaille, wound badge in black and "HKE in Eisen" and discharged in 1918 as Leutnant der Reserve. In 1937 he was again called up for service. Flott entered the Luftwaffe as an Oberleutnant withing an air defence unit "Luftverteidigungs-Nachrichten-Abteilung 9" and was awarded with the war merit cross 2nd class with swords in 1940. He was transfered to several other Nachtrichten units in Germany untill 1944 and was discharged very late in december 1944. With the Wehrpass comes the official paper that was sent with the Wehprass and hi sWW1 Soldbuch.