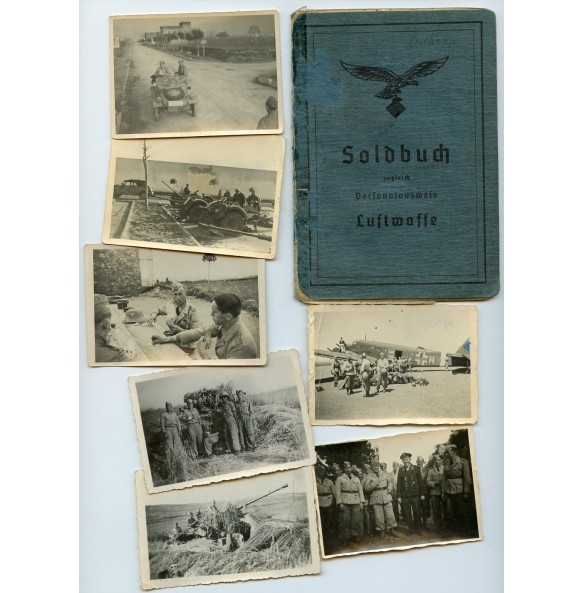 Luftwaffe soldbuch to Hermann Roskopp, member of the Leichte flugabwehrguppe and "Fliegerfahrer Afrika", Leichte Flak Abt 99 and later FJR10 in Northern Italy. Roskopp was awarded with the flak proficiency badge and later in 1944 with the actual Luftwaffe flak badge. For the Africa campaign he received the Afrika cuff title. Roskopp saw mainly action in Italy with the Lei Flak Abt 99 that was later transformed to the Fallschirmjäger Regiment 10 which later operated in the Milano region (Imonaand Apennines. This regiment was often strenghtened with Luftwaffe troops from different branches. Latest wartime entries in the soldbuch are made in 1945. In June 1945 entries from the prisonor camp were made as Roskopp was taken prisonor by the American forces.

The Soldbuch remains in very good condition with all pages intact. No photo. inside. It comes with  7 outstanding and very rare photos of his unit. One Ju 52 from "Fliegerfahrer Afrika" and several photos in tropical outfit taken in Bagnoli and Sorento, one in Capri and two stunning photos of a camouflaged flak positiion in North Italy (possibly between or during the switch from lei Flak 99 to the FJR10.