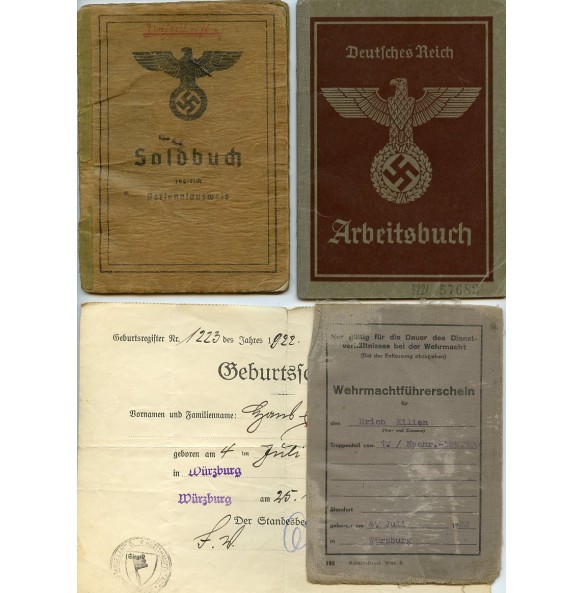 Soldbuch to Obergefreiter Erich Kilian, member of the Jäger Regiment 54, part of the 100. Leichte Infanterie Division that was destroyed in Stalingrad.  According to the drivers licnense Killian was already a part of the Nachrichten-Abt 100 on 23.7.1943 so he saw action in Croatia, Albania and later in the North of Ukraine. On 15.4.1944 it was in the small village of Bobülince (Bobulyntsi) he received one active close combat clasp day entry in the Soldbuch! On 5.9.1944 Kilian got seriously enjured (entry 31b soldbuch code) and was taken to a Lazarett in Germany for recovery where he stayed till 13.1.1945! For this enjury he received the wound badge in black. Early 1945 Kilian was transfered to the Artillerie-Ersatz- und Ausbildungs-Abteilung 109 in Amstetten.

Complete with all pages intact and uniform photo inside. The soldbuch comes with the Arbeitsbuch, drivers license and birth certificate.