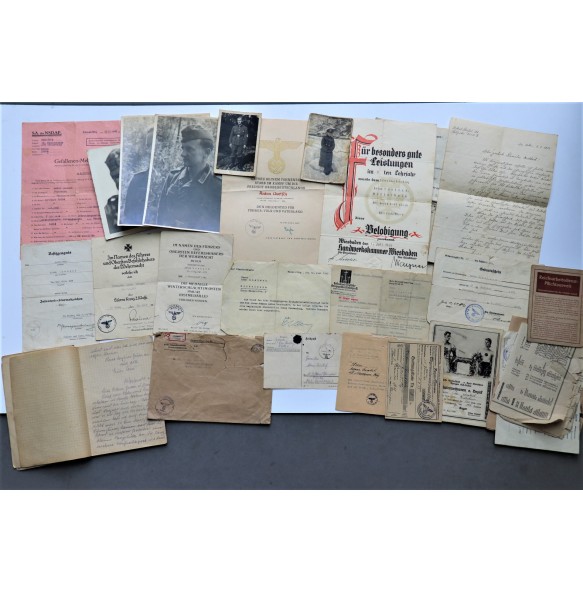 KIA grouping go Gefreiter Anton Quetsch, member of the 12th Komanpie of the "Jäger regiment 229" and earlier Infanterie Regiment 229 as part of the 101. (le) Infanterie Division. The group consists of 3 award documents: EK2, Infantry assault badge in silver and the east front medal; the "heldentod" document which was sent to the family (with original envelope and writings). The very interesting diary where Quetsch writes down some of the actions in Russia, the day he received his EKII and shockingly the last words before he was KIA in the Donetsk Basin after his actions around bridge head of Staryj Ssaltoff. He must have been killed between Charkow and Gorlowka where the regiment was fighting heavy resistance. The group comes with a lot extra paper work, please see the pictures.

Obergefreiter Quetsch was posthumously promoted and received the Iron cross 1st class! This was also mentioned the diary by his kompaniechef, the last words that were added to this book.

Nice and complete paper grouping of a soldier who lost his life at the eastern front and received the EK1 for his bravery in the field!