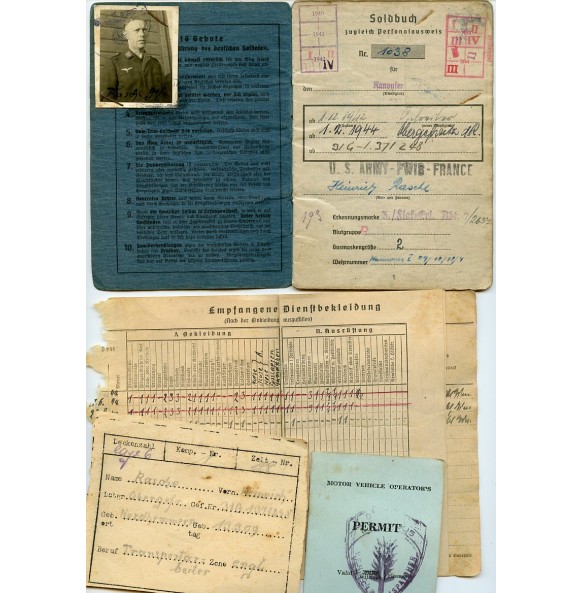 Soldbuch to Heindrich Rasche. Rasche, from Südhemmern, Westfalen was a prefessional driver within several heavy flak units (schwere Flak-Abteilung 639, schwere Flak-Abteilung 396 (o), s.Flak-Bttr.zbV 6253) based in Germany. Within these units he received the flak proficiency badge on 15.6.43. Early spring 1944 he was transfered back to the schwere Flak-Abteilung 396 (o) that operated under the Flak-Regiment 179 (Flak-Brigade XXI) and was deployed in Flakgruppe "Schweinfurt". Very interesting is that this entry was immediately switched to the SS-Flak-Abt. 2 "Das Reich" who was based in Normandy at that time. The last Soldbuch entries date 19.9.1944 and ??.10.1944 in the Dienstbekleidung section. Rasche was captured by the US Army any date behing this from the retreat from Normandy to the battle of the Bulge.

The Soldbuch remains in very good condition with all pages intact. Original uniform photo of Rasche inside. The Soldbuch comes with a post war POW pass and a drivers license, he was employed as a truck driver by the US Army.