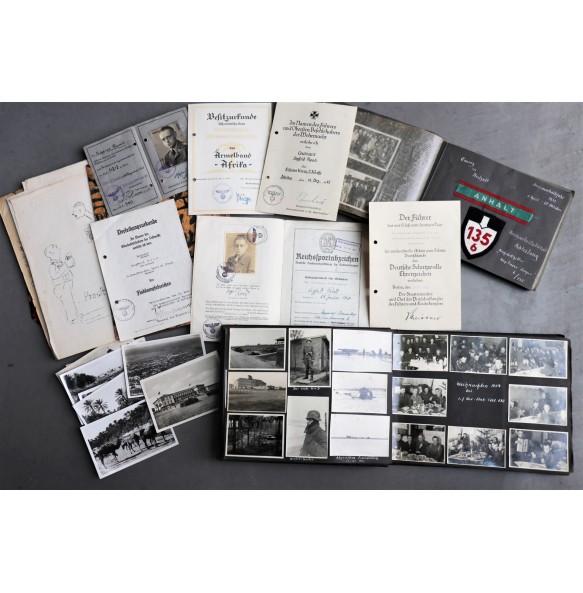 Grouping to Luftwaffe Leutnant Rood, Flak officer in Africa, Westwall. Rood started with an imprssive RAD service within "Arberitsdienstabteilung 6/135" (Mangelhausen). Many interesting photos visible in the first album, together with some RAD insignia pasted inside. Around the start of the war Rood was awarded with the DRL sport badge and the Westwall medal. Rood was then transfered to Flak Regiment 44 and when war started to 1. Batterie)Res.Flak-Abt 642.. Rood's first mission were to protect the Westwall and organise the flak settings on the Western border of Germany in the Krefeld area. The photo album of Rood shows a stunning series of very professional photos of the flak bunkers in the area of Kaldenhausen. Many photos of Flak 88, equipment, optics etc. Rood was then send to the Kriegsschule of Rerik. Afterwards some photos of a transport to Denmark before he was send to Afrika 1942/43. Here we can see Rood in a full tropical outfit as well as some local photos in Bengasi, Lybia. Rood was awarded the EK2 and Afrika campaign cuff title and was then send to Romania. In March 1944 Rood was awarded the Luftwaffe flak badge in Berlin-Dahlen when he was part of the Gem. Flak Abt 46.

The grouping came directly from the family and has never been touched. A great group that could use some further research!!