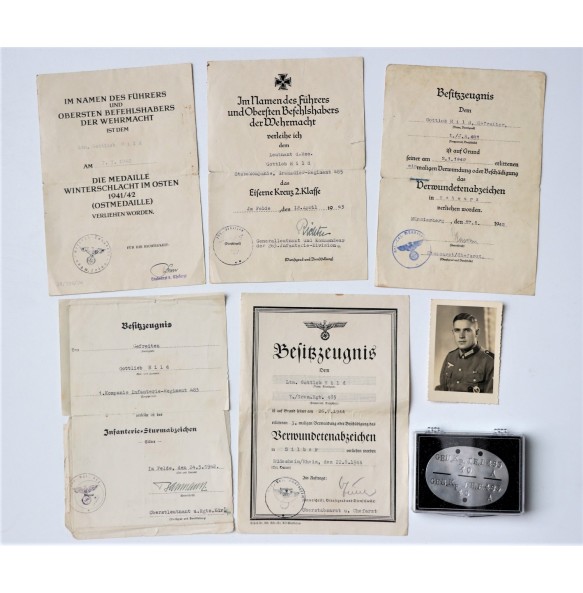 Document grouping to Leutnant Gottlob Hild. Member of the Infanterie Regiment 483 (263. Infanterie Division) which saw action in Moskau, Juchnow, Newel. Hild was wounded during the retreat from Mokau. He recieved the wound badge in black and a little later the east front medal. For several assaults at the front he now also received the Infantry assault badge in silver on 24.5.1942.  In 1943, when the unit fought the Russian counter attacks in the area Spass-Demensk and Velizj  Hild was promoted to Leutnant and was awarded with the iron cross 2nd class for his bravery at the Eastern front (EK2 award document hand signed by Knights Cross winner Generalleutnant Werner Richter) . He was now sent back home for a reformation of the unit.

The Regiment was now transformed to Grenadier Regiment 485 with Heeresgruppe Nord. Hild saw action at Newel and later at the Baltic states. Hild got wounded a third time in Finland in July 1944. For this enjury he received the wound badge in silver. Interesting wound badge in silver document with national eagle on top.

All documents show small traces of age but remain in very good condition. The group comes with a small photo of Hild and his ID tag.