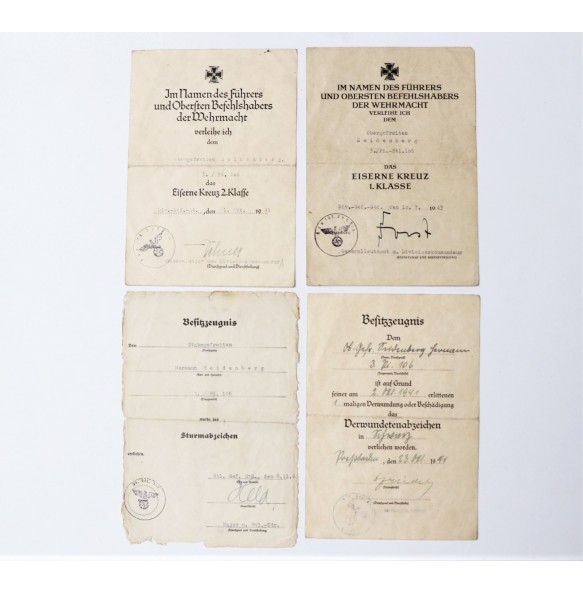 Award document grouping to Obergefreiter Hermann Seidenberg member of the 3. Kompanie of Pionier Batallion 106 as part of the 106. Infanterie Divison. The 3rd kompanie was mainly attached to the Infanterie Regiment 241 and moved with the Division through Wilna, Witebsk, Smolensk, Wjasma, Rshew, Spasskoje, Troitzkoje in 1941. The bravery of this Pionier Battalion was not unseen by the commanding officers, General der Infanterie Ernst Dehner gave his honors to them in the field! Seidenberg was awarded with the iron cross 2nd class on the 1st October 1941, signed by Knights Cross winner General der Infanterie Ernst Dehner! Just one day after the EK2 ceremony he was wounded in action and was transfered to a Lazarett behind the front.

A year later after the units rested out in France, Seidenberg rejoined his unit and was send to Charkow. He was there awarded with the iron cross 1st class. His award document was hand signed by Knights Cross and Oak Leaf winner Generalleutnant Werner Forst. Seindenberg was also awarded with the special Pionier- or General assault badge a bit later. This document is hand signed by the Major and Pi. Btl commander Hauptmann Held.

More info about the bravery of the Pi. Btl 106 you will find on the link below: