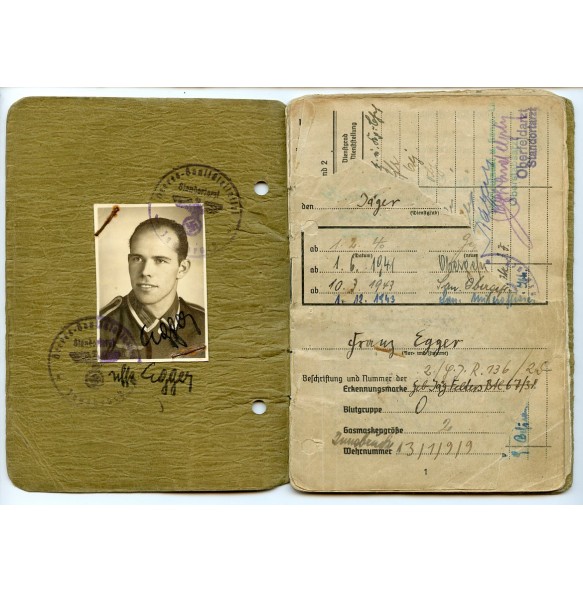 Soldbuch to Uffz. Franz Egger, member of the Geb. Jäger Rgt 136. Egger saw action in Norway, Poland and Finland and received the iron cross 2nd class for his bravery in the field. He started with a close combat calendar in the soldbuch in which two days of close combat fighting were entered "Höhe 122 südl. Kutowaja" and "Höhe 240,8" both in the higher Finnish areas. Eggar got seriously wounded by two granade shrapnels on 18.7.1941 and just alittle later on 7.8.1941. The wound must have been quite serious since he stayed hospitalised untill 24.3.42. Eggar was also sent to the Lazarettschiff "Meteor" for revalidation.  Eggar was promoted untill the rank of Sanitäts Unteroffizier. He remained in Innsbrück during the later years of the war under the Gebirgs-Sanitäts-Staffel "Innsbrück". Soldbuch in good condition, not denazified and with top uniform photo of Egger. Page 1/2 slightly damaged on top but all interesting info is there. Page 5/6 of the uniform entries is missing. All other pages are there and very well filled out.