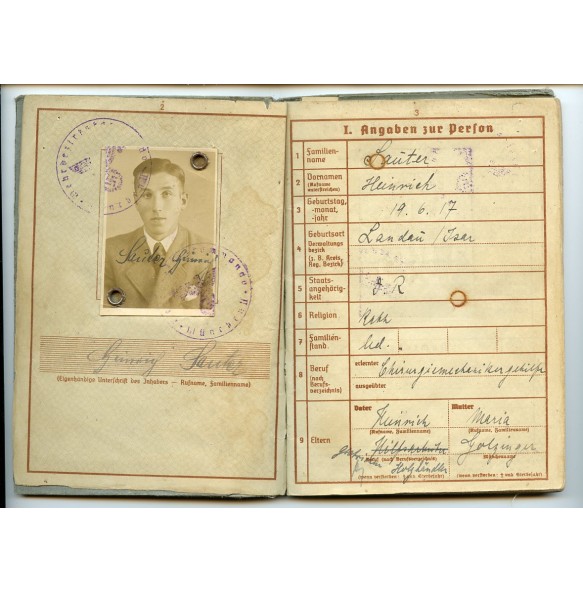 Wehrpass to Uffz. Heinrich Sauter, member of the Geb. Art Rgt 79. Sauter saw action in Poland, France and was then sent to the Balkan area. Later at the Russian front they fought under the 1. Geb. Division. Later in 1943 some interesting anti partisan fighting entries in Serbia, Montegro and Greece! Sauter was awarded with the IAB and Westwall medal in 1940, EKII in 1941 and later the ostfront medal for the eastern front campaign. During his active participation in the war he also managed to climb educationally. He was promoted up to Unteroffizier and made it to Funktrüppführer and military teacher! Very interesting artillery entries such as the "7,5-cm-Gebirgs-Kanone M.15 Skoda" and "Gebirgsgeschütz 36" can also be found.

On the back of the Wehrpass a very interesting close combat day calander was kept with 15 days of close combat between 29.6.41 and 11.10.1942 mainly in the Ukraine!!

The Wehrpass is complete with all pages and photo of Sauter inside. Very well filled out book.