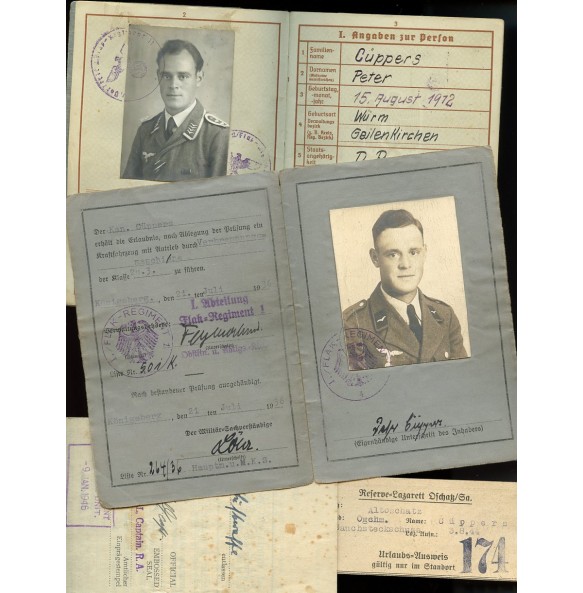 Luftwaffe Wehrpass to Oberwachtmeister Peter Cüppers, member of Flak Regiment 11. Cüppers joined the Luftwaffe (Flak Regiment 1) very early in 1935 as professional soldier and signed for 12 years service till 30.9.1947. Already promoted to NCO before the war and now attached to the Flak Regiment 11, Cüppers saw his first action in Poland during the invasion. His battle calendar already stated 28 days with enemy engagement in Poland which some in Warschau and Modlin. At the outbreak of the Blitzkrieg Cüpper was again send into battle within Flak Regiment 11. Trained with almost every flak gun there was his unit broke through in the Ardennes in Belgium and crossed the border towards France where they continiously covered the front units with Flak. Cüppers was awarded with the EKII in 1940 for his brave actions and continued to protect the freshly captured country against English airraids. During the invasion days and in the fall of 1940 Cüppers counted 58 days of direct enemy contact!! After the Blitzkrieg Cüppers was send to the eastern front. The unit was send to Byalistok, Minsk, Smolensk, Gomel, Kiev, Wjasma, Brjansk, Moskau, Woronesh and again Moksau. In 1942 and 1943 Cüppers saw tons of action around Orel. The Wehrpass states nicely how many days in combat ànd how many days with direct enemy contact. The count is incredible. Cüppers was also awarded now with the Luftwaffe flak badge and wound badge in black for a shrapnel in the hand (near Orel). 23.7.44 Cüppers got seriously enjured by an other grenade impact: his rightarm, complete abdomen and big toe. His discharge papers which are also part of the group even tell in 1946 about this enjury : disability "Bauchschuss, beschränkt". He was placed now under the reserves of the Abteilung but was awarded with the iron Cross 1st class (12. Flak Division).

The 12. Flak Division where Cüppers unit served with was responsible for taking down 1050 aircraft and 657 enemy panzers at the eastern front. Looking at the incredible combat calendar and award list of Cüppers, he definitely had a part in this.

Fantastic complete Wehrpass of Peter Cüppers, who served actively a full 10 years with the Luftwaffe. The Wehrpass comes with his drivers license and capture papers. Wehrpass with beautiful portrait photo with awards in wear.