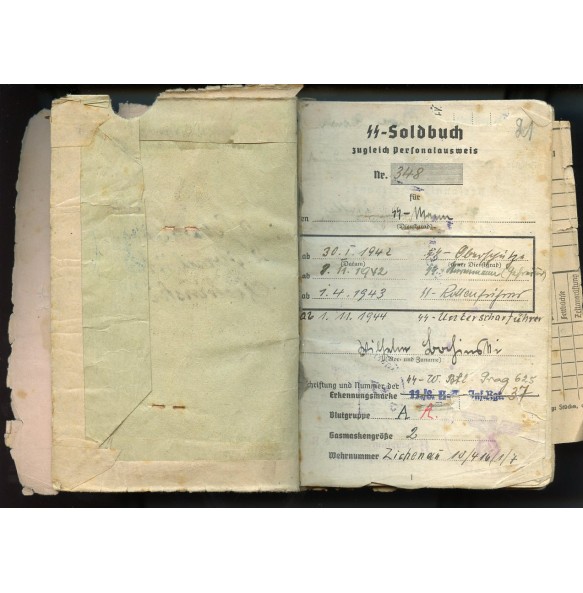 SS Solbuch to SS-Unterscharführer Wilhelm Bochinski, entered service on 3.7.1940 with the 8.SS "Totenkopf" Infanterie Regiment.Later in 1940 moved to "SS Wachbattalion Prag and was then trained as Flak crew to serve SS regiment "Deutschland". Bochinski was transfered in May 1944 to the SS Flak Abt. 18 "Horst Wessel" and served in North ukraine, Slovakia, Hungary and retreated to retreat to Czechoslovakia. Heavy wound on 12.3.45 on his left arm, hand and shoulder and brought to Kriegslazarett 685 and then send to Meerane and after the war to Werdan. Bochinski never returned to the front.

The Soldbuch shows signs of age. It was field modified with a new cover, the photo was taken out and the last pages after 18 are missing. Very interesting units!

A nice well worn but rare SS Soldbuch to an SS-Unterscharführer from 18. SS Freiwilligen-Panzergrenadier-Division Horst Wessel who was most likely well decorated.