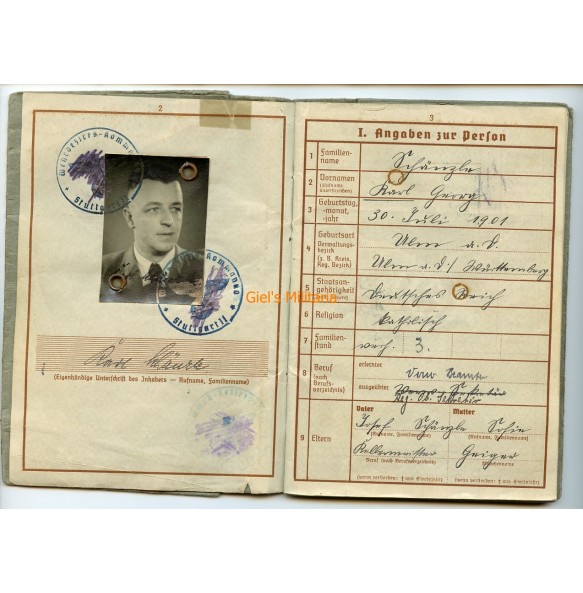 Soldbuch and Wehrpass grouping to Stabsfeldwebel Karl Schänzle. Born in July 1901, Schänzle just missed out on military service during WWI, but completing Mittelschule he joined the Württembergische Landespolizei in Stuttgart, 1924. After a career of almost eleven years, Schänzle moved to the Gendarmerie in 1935 and was promoted to Oberfeldwebel there in 1938. His long police service resulted in the awarding of the Polizei-Dienstauszeichnung 3. Stufe in 1943.  His higher age did not prevent Schänzle from military mobilisation, and his police experience was put to good use: after two months of basic training with Landesschützen units, he joined the staff of the Turkistanische Legion during its formation in the Ukraine, July 1942. Formed by Turkic volunteers who were usually recruited among Russian POW's, the Turkestan Legion obviously also enlisted a large number of experienced German staff personnel like Schänzle. He would quickly transfer to another foreign legion, the Armenische Legion, recruited among the Russian POW's wanting to fight the Russians in their struggle for an independent Armenia. After almost a year with the Armenian Legion, both the Turkestanische and Armenische legions were merged with a number of other foreign volunteer units like Azeri and Georgians into a 162. (Turkestanische) Infanterie-Division. Schänzle assisted in the formation of the 162.ID, and later trained Turkic volunteers with the Turkestanische Ersatz-Regiment 162 and its successor, the Freiwilligen (Turkestanische) Stamm-Regiment 3 in occupied France. With this unit, Schänzle would stay in the training ground area of Bitche (Lorraine), until he was forced to retreat following the Allied invasion. He joined the staff of the Freiwilligen Stamm-Division for the rest of the war. It appears he avoided capture and quickly returned to his wife Paula and three children.  For his years of service with the Turkic and Armenian volunteers, Karl Schänzle was awarded the rare Verdienstauszeichnung für Angehörige der Ostvölker II. Klasse im Silber, added to an early DRL Sportabzeichen, a KVKII mit Schwertern in 1943, and the forementioned Polizei-Dienstauszeichnung.  Both Wehrpass and Soldbuch are in good and complete condition. In the Wehrpass, notice the entry on German staff personnel (in foreign volunteer units) just above the Ostvölker award on page 21. In the Soldbuch, note the equipment issued by "Dulag 127" on page 6. This "Durchgangslager" was a POW transit camp for Russian POW's in central Russia; a typical place in which volunteers were recruited. Other interesting entries include a Polish P.35 pistol with ammunition and a great variety of foreign legion stamps.