Sad grouping to the Maurer family from Hagen, both sons and father KIA 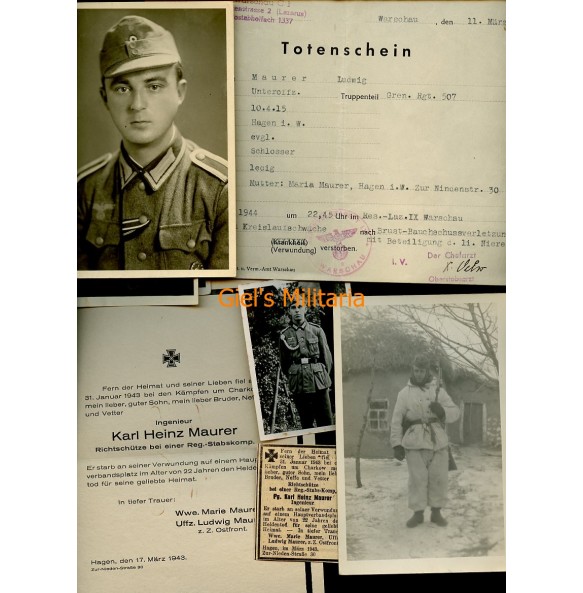 Sad grouping to the Maurer family from Hagen, both sons and father KIA

Vert sad paperwork/photo grouping to the Maurer family from Hagen. Engineer and father of two sons, Ludwig Maurer died a natural death just before of the start of the war, leaving his wife, Marie Maurer with her two sons, Ludwig and Karl Heinz. At the start of 1943 Maria was given the worst news, her youngest son, Karl Heinz, let his life at battle in Charkow (Kharkov). The grouping has two original photo of Karl Heinz, his death card and death notices of the city Hagen. Also his brother Ludwig received a letter at the front that his younger brother was KIA at one of the larger battles in the Ukraine. A year later Marie had to receive an other letter, her second son, Ludwig was also KIA. Ludwig Maurer was shot by partisans in Warschau. With heavy wounds he was still transported to the hospital but that evening he let his life. Three large portrait photos of Ludwig, new paper death card and letters are in the group. Several other documents.