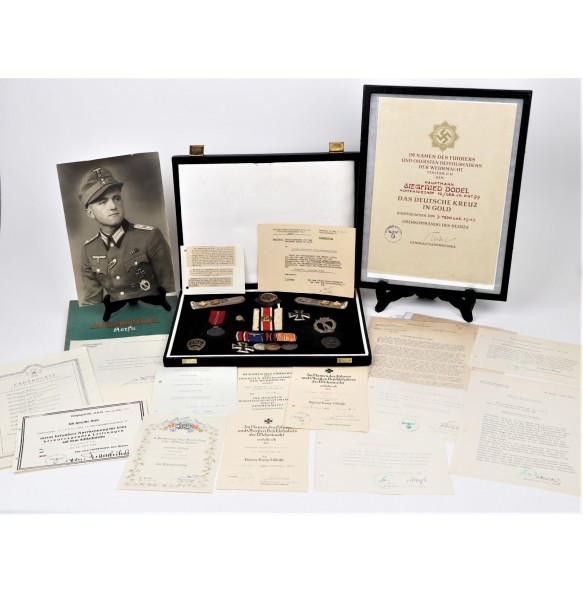 Grouping to Hauptmann, later Major Siegfried Dödel. Dödel started of in 1939 as Leutnant within Gebirgsjäger Regiment 99. The Regiment was also operational in Poland and Dödel was immediately sent to the front as part of the 1.Gebirgs-Division. Withing the 12. Kompanie fighting in the area of “Sanok” and Dodel performed a dangerous reconaissance mission with a motorbike and later also fought back an enemy force with the use of an MG. A few days later, in the Rzesna-Ruska area, Dodel was shot through the hip and upper leg. For this wound he received the wound badge in black. Later he also received the iron cross 2nd class very early in the war for his military merits on the battle field in Poland.

A few months later the Blitzkrieg started and again the Dodel’s unit was send as front unit in action. At the earliest stages of the war Gebirgsjäger Regiment crossed the borders of Luxembourg and entered France. A few days later they crossed the river Meuse (Maas) towards to the village of Revin and within a few days they were able to move far in the country fighting off the French army on several positions. During the night of 17 and 18 May 1940 in the forest of St. Michel, Leutnant Dodel leaded an other military operation against an enemy French armored vehicle (possibly a tank) they spotted. The tank had to retreat because of the attack and the crew needed to abandon. Because of this they were able to capture 4 more enemy tanks and 2 enemy bunkers. On 10.6.1940 Leutnant Dodel again saw action in the village of Ourcg were they had to clear the bridge head under enemey fire and machine gun fire! Later he was engaged in close combat in the village of Vichel were they had to clear house per house to clear up the village. During the whole operation in France Dodel showed true leadership and bravery on the field. For these actions he was awarded with the Iron cross 1st class and the infantry assault badge in silver.

The 1. Gebirgs-Division was now sent to the South East and Dodel, now promoted to Oberleutnant and Chef of 12./Gebirgsjäger Regiment saw action in Yugoslavia first and later in Galicia (Galizien) were they encountered the first parts of the Russian army and were able to make them retreat behind the Stalin line. For these actions Dodel recieved the prestigious honour roll (Ehrenblatt des Dutschen Heeres).

It was not until May 1942 that the regiment was again ready to take offensive steps. On May 17, 1942, the attack on Barvenkovo began, during which the regiment was able to break through the Russian positions and capture Barvenkovo. Three Russian armies were trapped in the Bereka Valley and destroyed by May 29, 1942. At the end of June 1942, Voroshilovgrad was crossed on the right and Starobielsk on the left, the Donets at Kramensk. Subsequently, the regiment marched to the Caucasus.

On August 5, 1942, the Don was crossed, in the period from August 12 to 21, 1942, the high passes of the Caucasus between the Elbrus, Maruch, Bgala and Adsapsh passes were taken. Subsequently, the regiment marched over the Matruckkojpass, the Klochorpass (17 August 1942) and the Elbrus towards Ssuchum. But at Elbrus the advance came to a standstill.

The Regiment was again placed at the Kuban bridge head were it suffered from heavy losses. Haptmann Dodel no also received the German cross in gold for bravery in the field.

Later that year Dodel was send out for a special mission “Unternehmen Verrat”. During this mission the 1. Gebirgs-Division that was now in the lower Balkan was send to the island of Korfu. The island that was still under Italian command didn’t want to surrender and needed to be cleaned out. The island was invaded during the following days and, after days of fighting and heavy losses on especially Italian side, had to surrender. Dodel even received a Kampfgruppe named after him “Kampfgruppe Dodel”

After this mission the Regiment was again sent to Bosnia and Croatia to fight off partisans (as they also have been doing in 1943. Dodel now received the Edelweiß ring as special recognition of the 1. Gebirgs Divison.

In a last Abschrift of 1.11.1944 (declaration of Oberleutnant Zöberlein and Leutnant Münch) Dodel got mentioned as a very brave Major fighting on the battle field but apparently he got captured by Tito partisans before the end of the year. Dodel never turned up again and was probably killed by partisans.

The group consists of all award documens of Major Dodel:

The group comes with the large medal case containing:

To the previous owner of this group it was known that a jacket with bullet inpact on the back was sold seperately from the group. A bullet or shrapnell that hit Dodel from behind hit his German cross in gold from the reverse. The German cross is bent with enemal damage but remains quite complete.

The Dodel group is a very rare German cross group to a Gebirgsjäger who made up up to the level of Major. Dodel never returned from the battle field and saw all heavy front activity of the Gebirgsjäger Regiment 99 inclusive the very dangerous anti-partisan missions in the Balkan. This rather historical grouping could definitely use some extra research and form the base of a book.