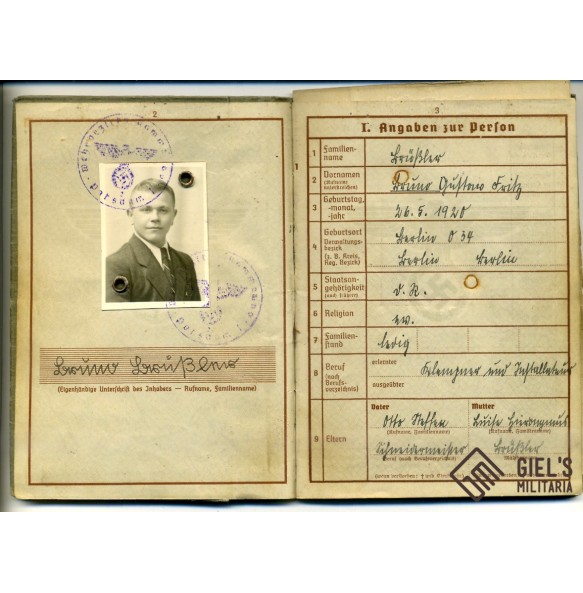 Wehrpass to Bruno Brüsler. Brüsler, from 1920 entered the wehrmacht later during the war. Only joining the 4. MG Ersatz Kompanie 479 on 31.3.42, Brüsler was already in Russia in June 1942! Moving through the Ersatz units of the 251. Infantry Division Brüsler was put in the 4th Kompanie of the Infanterie Regiment 459. This unit, also part of the 251. ID was very active in the Russia, in the area of Rshew. It's also here were Brüsler was frst promoted to Gefreiter and then saw some serious action. Brüsler got heavily wounded twice in 11 days, one artillery granade shrapnel in the under arm and an other hit in his upper leg made him uncapable for any more front action. For his bravery he was awarded with the Iron cross 2nd class and the wound badge in black. Brüsler was sent to the entlassungsstelle and was discharged from the army.

The wehrpass comes with some extra field post letters written by his mother.