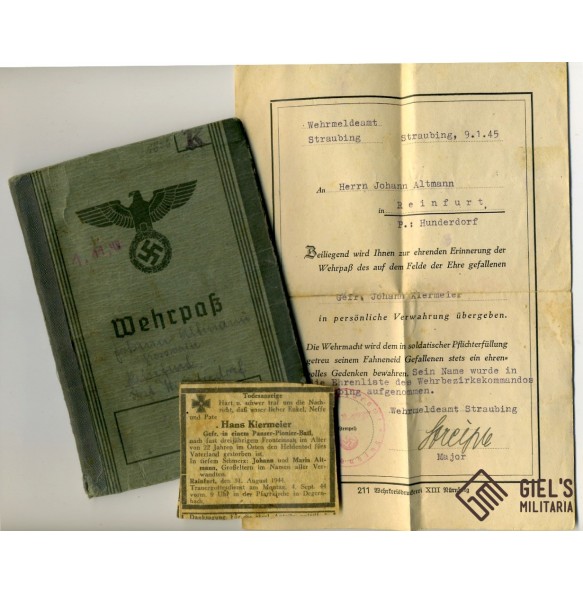 Wehrpass to Johann Kiermayer. Kiermayer was a member of the Panzer-Pionier Battalion 98, this unit that was placed under the 18. Panzer Division. Because of his young age, Kiermayer only saw combat for the first time in Russia May '42. His unit saw a lot of action in the Orel (Defence of Shisdra) area, for the assaults he performed he was awarded with the General assault badge. It was also here where Kiermayer was wounded in action for the first time. On 10.2.43 Kiermayer took two granade shrapnell impacts in his left foot, and 5 months later an other impact in his left lower arm. After the battle in Kursk, the Pz.Pi Btl. 98 was disbanded and Kiermayer was transfered to several Marsch kompanies. On 1.6.44 Kiermayer was KIA within the Panzer Pionier Battalion 13, probably in the North of the Ukraine just before the unit was moving to the Kurland.

A wehrpass from a brave Pionier within a panzer unit that sadly knows a bad ending. The Wehrpass remains in very good condition but has some drawings from children inside (probably post war). A post war writing from his unit was send to his father and a death notice from a news paper come with the wehrpass.