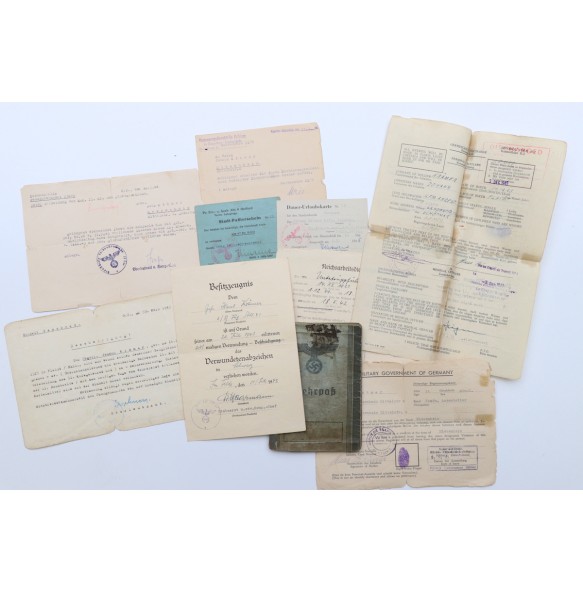 Small grouping to Johann Krämer. Krämer was a member of the Panzer Jäger Abteilung 41, part of the 6. Panzer Division. Because the grouping only consist of the items that were sent or left at home, it's the complete unit history is unsure. Krämer was wounded on 20.7.43.  Judging by the date of the wound Krämer was most likely wounded in the Charkow area. It was awarded in the field. On 31.7.43 Krämer was awarded with the Iron Cross 2nd class and the General assault badge ("Besonderes Sturmabzeichen"). During the final stages of the war Krämer was part of Einheit Techner (Panzer Ersatz und Ausbildung Abteilung 6) were he also received the rank of Fahnenjuncker. It was here were he was awarded finally with the Iron Cross 1st class for the defence lead with "Einheit Teschner". Because of a more serious wounds in this period Krämer was left from active service from 30.3.45. Capture and discharge papers are included too.

The group consists of the following items:

- Wound badge in black award document (awarded in the field)

- Übersendungschreiben for the EK2 and General assault badge ("Besonderes Sturmabzeichen")

- Confirmation of the Iron Cross 1st class, signed by the Oberleutnant and commander of the Lehrgang (Teschner) of Panzer Ersatz und Ausbildung Abteilung 6.

- Confirmation of the the discharge paper of the German army on 30.3.45

A small but interesting group!