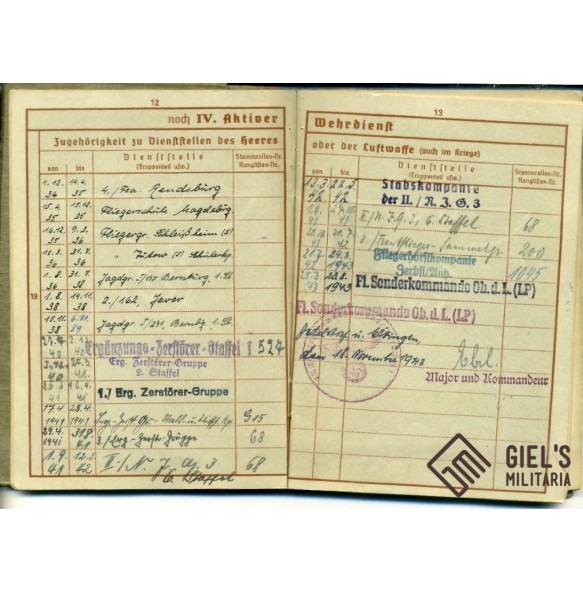 Wehrpass to F. Giehl. Giehl was born in 1912 and already took military service at young age. In 1934 he trained for pilot in Rendsburg and shortly after received the degree of flugzeugführer. Giehl took part in the Spanish civil war in the 1st staffel of the Jagdgeschwader 137 which afterwards became Jagdgeschwader 231. This fighter unit was equipped with the first Messerschmitt Bf 109 D-1. For the Spanish war Giehl was highly decorated with the Spanish cross in gold (one of the 1126 recipients!!!!) and several other awards. After the this war Giehl was put on the invasion of Poland and flew several imortant combat missions with his Me 109 and took 2 air victories on 07/09 and 11/09 by shooting down 2 Polish PZL 24's. For these actions Giehl would receive the iron cross 2nd class a few days later. The succes of Giehl didn't last long, on the 6th of november 1939 he was shot down and taken in French captivity (as the wehrpass also states on page 32 "seit 6.11.39 französische gefangenschaft"). Luckily for Giehl France was invaded 8 months later and Giehl was taken out of prison and returned to the Ergänzungs Zerstörer Staffel 1 which was active in the Scandinavian area "Vaerloese". He most likely was put back from action and served several months as an instructor.

On 8th october 1940 Giehl flew together with his crew Olt Wilhelm Küster, Fw Fritz Giehl, Gefr Wilhelm Oechsle, Fl Otto Meier on a mission in the Copenhagen area but for a routine navigation flight. Not knowing at the time how agressive the Swedish aircraft might be, or maybe of their own position, the Fw followed the Sk 14 to its base at Ljungbyhed and landed at 10.45H. The Swedish trainer was crewed by Ltn Per Svensson and his pupil at the time. The German crew was interned at the time while the Germans was informed of what had happened. The German crew was handed back to the Germans on November 29th at Helsingor. The aircraft itself was flown to Satenas on November 12th, most certainly for investigation, and on December 12th it was flown by the Swedish test pilot Lambert Mueller back to Kastrup. (source http://forum.12oclockhigh.net)

Giehl was mainly active in the North German and Danish area between 1940 and 1943 and flew with the Messerschmitt Bf 110. He switched between several luftwaffe units and even joined the staff of the Nachtjägdgeschwader 3!!

After 1943 Giehl became active as airplane tester within the Junkers front repair facilities. This is also where he was killed during a test mission. In the wehrpass they wrote "Oberfeldwebel u. Kriegsoffizieranwalter Fritz Giehl fund am 23.8.43 dem Fliegertod".

The wehrpass remains in very good condition, all pages intact. No picture of Giehl was ever put in the book. With a pencil someone even wrote "Bild fehlt"

The wehrpass of Fritz Giehl should be considered as a truly historical document and absolute unique piece. Giehl was a top early fighter pilot during the Spanish and Polish war and taken prisoner by the French in november 1939.