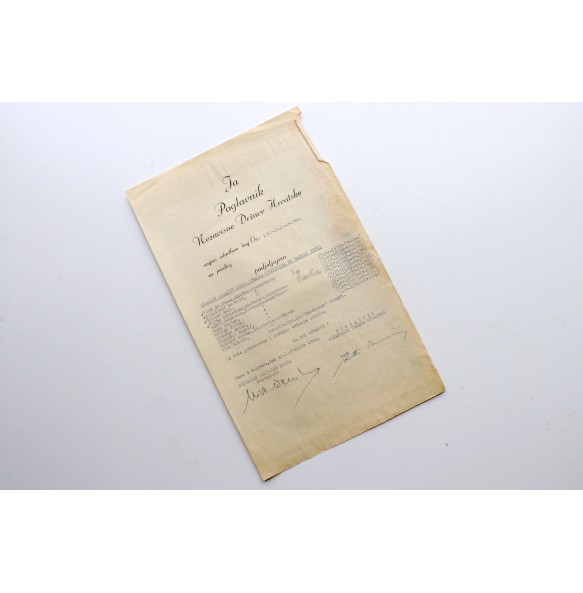 Croatian medal recommendation letter for 11 members of the 13. Waffen-Gebirgs-Division der SS „Handschar“. The document was hand signed by the Croatian fascist "Poglavnik" Ante Pavelić! The document (slightly taller than A4 size) remains in very good condition with light signs of age.

Pavelić was a Croatian fascist dictator who led the Ustaše movement and the Independent State of Croatia (NDH), established in parts of occupied Yugoslavia during World War II with the support of both Fascist Italy and Nazi Germany. While in power, Pavelić pursued genocidal policies against ethnic and racial minorities such as Serbs, Jews, and Romani.

At the start of his career, Pavelić was a lawyer and a politician of the Croatian Party of Rights in the Kingdom of Yugoslavia known for his nationalist beliefs and support for an independent Croatia. By the end of the 1920s, his political activity became more radical as he called on Croats to revolt against Yugoslavia, and schemed an Italian protectorate of Croatia separate from Yugoslavia. After King Alexander I declared his 6 January Dictatorship in 1929 and banned all political parties, Pavelić went abroad and plotted with the Internal Macedonian Revolutionary Organization (IMRO) to undermine the Yugoslav state, which prompted the Yugoslav authorities to try him in absentia and sentence him to death. In the meantime, Pavelić had moved to fascist Italy where he founded the Ustaše, a Croatian nationalist movement with the goal of creating an independent Croatia by any means, including the use of terror. Pavelić incorporated terrorist actions in the Ustaše program, such as train bombings and assassinations, staged a small uprising in Lika in 1932, culminating in the assassination of King Alexander in 1934 in conjunction with the IMRO. Pavelić was once again sentenced to death after being tried in France in absentia and, under international pressure, the Italians imprisoned him for 18 months, and largely obstructed the Ustaše in the following period.

At the behest of the Germans and Italians, senior Ustaša Slavko Kvaternik declared the NDH's establishment in the name of Pavelić, the Poglavnik. Pavelić returned and took control of the puppet government, creating a political system similar to that of Fascist Italy and Nazi Germany. The NDH, though constituting a Greater Croatia, was forced by the Italians to relinquish several territorial concessions to the latter. After taking control, Pavelić imposed largely anti-Serbian and antisemitic policies that resulted in the deaths of over 100,000 Serbs and Jews in concentration and extermination camps in the NDH, murdering and torturing several hundred thousand Serbs, along with tens of thousands of Jews and Roma.These persecutions and killings have been described as the "single most disastrous episode in Yugoslav history". The racial policies of the NDH greatly contributed to their rapid loss of control over the occupied territory, as they fed the ranks of both the Chetniks and Partisans and caused even the German authorities to attempt to restrain Pavelić and his genocidal campaign.

At the end of the war in 1945, Pavelić ordered his troops to keep fighting even after the German surrender. Kvaternik was captured by the U.S. Army and hanged in Zagreb two years later in 1947. When the Partisans began arresting fleeing Ustaše and killing them on death marches in the Bleiburg repatriations, he fled to Austria to avoid capture, and later to Argentina. After moving to Argentina, he was shot in an assassination attempt on 10 April 1957 by a Serb, Blagoje Jovović, dying in Spain on 28 December 1959. (Wikipedia)

Extremely hard to find documents relating to the SS Handschar Division!! With the hand signature (no facsimile!) of Pavelić an absolute top piece!