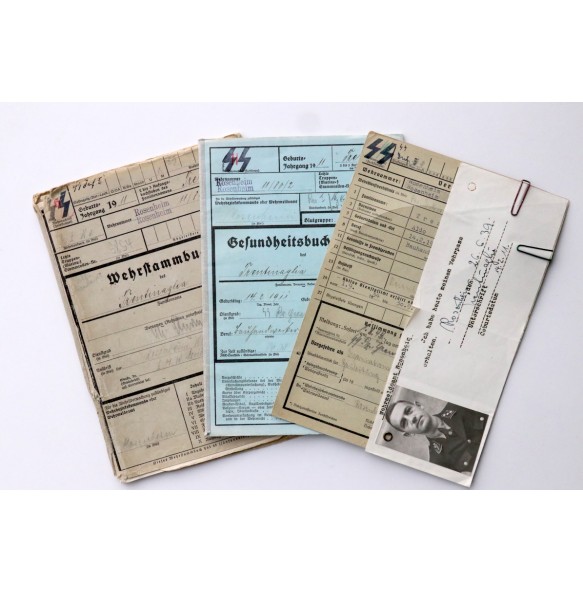 SS document grouping to Aldo Trentinaglia from Rosenheim. Trentinaglia was one of the earlier member joining the SS VT "Deutschland" in Munich on 1.9.1934. He was also Sturmführer and commanding officer of also the Algmeine SS in Stürme 3/34 Standort Rosenheim, Trentinaglia saw action in the Sudetenland and Poland with SS "Deutschland" and was wounded in action by a granade shrapnel in the face on 12.9.39. He suffered from a serious eye injury which might have been the reason he left the front. For this wound he received the wound badge in black. On March 1940 Trentinaglia went to the Panzer Abwehr unit of SS Deutschland for additional training was then moved to the reserves of the Division. On 25.6.40 he was awarded the NSDAP 10 year service medal (rarely encountered as an entry!) for his political career and in 1941 he received a nice office post in Germany and became Kreiswalter of the NSV (Nationalsozialistische Volkswohlfahrt)  where he received the War Merit Cross 2nd class and the Welfare medal during the period. Only later  but was then transferred between several training units for example in Praque August 1944 were he was then also promoted to SS-Sturmmann in the Waffen-SS.

The group contains a rarely encountered Wehrstammbuch, issued in 1934 by SS Standarte "Deutschland", the Gesundheitsbuch and a Verwendungskarte. It also contains the confirmation of receiving a wehrpass with the photo of Trentinaglia in his Sturmführer Standarten 34 uniform.

Interesting group that could use some extra research. Clearly Trentinaglia had a much bigger political role (Algemeine SS and leading role in the NSV) than active role during the war.