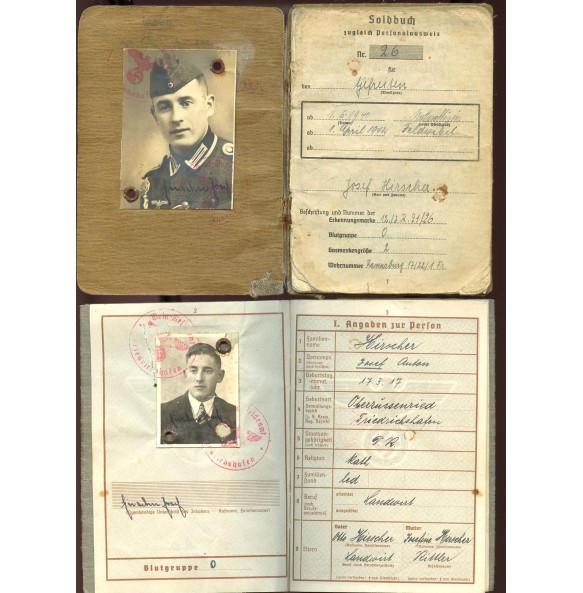 Soldbuch and Wehrpass to Feldwebel Josef Hirscher, member of Infanterie Regiment 91 and later Infanterie Regiment 331. Hirscher was wounded on 6.6.1940 at the Somme near Amiens. With this unfortunate left arm wound Hirscher was fixed in the mobile hospital but not joined anymore action in 1940. After being part of the occupation group in France he joined Infanterie Regiment 331under the 167. Infanterie Division. Hirscher took part in many famous battles on the eastern front: Brest, Gomel, Brjansk but was stopped again first by a granade schrapnel in neck and later by an other schrapnel in the head. For his actions in the East and before he received an impressive number of awards: EK2, EK1, the infantry assault badge (IAB), the wound badge in silver (WBS), and the east front medal. The passes also show earlier awards: Czech annexation, Sports badge, shooting lanyard.

Wehrpass in very good condition with civil photo, all pages intect. The soldbuch with large photo of Hirscher and his shooting lanyard in wear. Last page of the soldbuch is missing.

Top set containing both passes or an EK1 recipient.