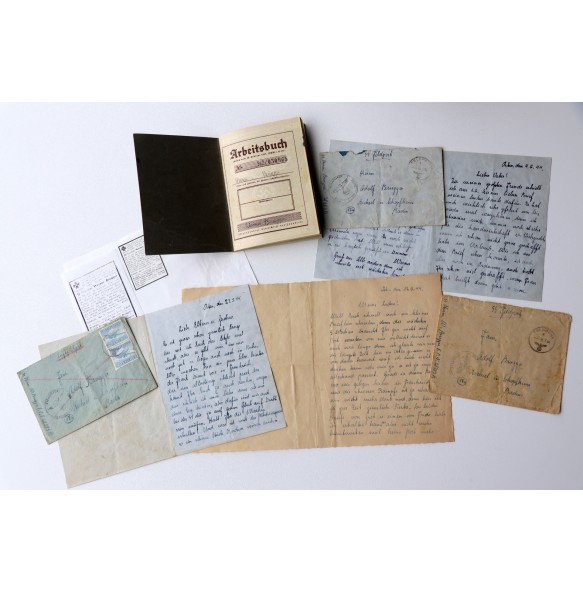 Small grouping to SS-Sturmann Werner Brugger, member of the 10th SS-Pz. Division "Frundsberg". Werner Brugger was KIA at the age of 18 in Normandy (Baron, South West of Caen).

The group contains the Arbeitsbuch of Brugger and 3 field post letters with the correct SS FP number of the unit "FPN 28383B" he wrote to his father Adolf Brugger. The first two letters are written in a very usual way while this unit was still in the East. With the invasion coming from the West in Normandy the unit was placed directly in France. In his last letter he writes that his family should no longer write or send anything because of the changes which seem stressful. He writes about the attacks in Caen where his unit has been. The group comes with a copy of a death notice of Brugger. Only 4 weeks after his last writings to his father, Brugger lost his life on the battlefield of Normandy near Caen. The death notice tells us he was KIA at the age of 18 on 10th of July 1944 while serving under the 10th SS Pz. Division "Frundsberg".